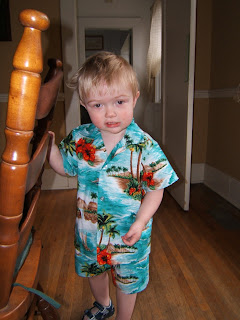 * Note, before reading this decide whether or not you want to read some gibberish that is slightly pity-party-ish. It really is, but I will try to make a decent point by the end. *

So, Joe and I overhear a lot of comments about our kids when we are out. For instance: "Look at that gimpy baby!" or "Now, that's just pitiful," (also about Ingrid). We mainly just have stares regarding Jack's odd behavior. Sometimes the brave child will ask us what's wrong with him or why he doesn't talk. (Which I think are honest and appropriate questions.) Today I heard a 12 year-old girl (approximately 12, at least) explain Jack's odd behavior at Petco to her younger brother (Jack was excitedly flapping his arms because he found a toy, well a dog toy, that he was getting) by saying, "He's a retarded fag." It was almost too much, and I just laughed. That is how someone is explaining my four-year-old's behavior? I am frustrated because some people never accept differences in others. What is a solution to this frustration? I am not sure.

But my winner for the oddest insult we have ever heard about our kids was from an older gentleman walking into a French bakery while Jack and I were leaving. (Picture is from approximate time period.) "Look at that hair," he spat, "he looks like a little German!" Well, I guess stereotypes, labels, and cut-downs have been around for quite awhile. I just want to help my children build up enough callous to protect themselves while still being thin-skinned enough to feel other people's pain.
Posted by Sally at 9:38 PM

people are horrible and hateful. I've never understood how an ADULT can say something mean about a PRECIOUS CHILD!!

"I just want to help my children build up enough callous to protect themselves while still being thin-skinned enough to feel other people's pain."

This is precisely the challenge of parenting in today's world. Thanks for putting it into words.

And what's up with the German insult? That's just odd.

Sally, I understand how much it hurts when someone says something about your child. The other day Jason had taken Jake and Ryan to the park. There was a group of kids playing ring-around the rosy. A little girl about six wouldn't hold Jake's hand because he was "weird". Its heartbreaking when someone can't except your child, even more so when its another child. I just kind of thought kids didn't really notice until they got older. Ryan seems to have an understanding beyond her years about people who are different. I hope she is able to one day teach other children that we're all different and we all have our own unique talents. Don't worry about Jack. I have a feeling Ingrid won't put up with anyone messing with her big brother.