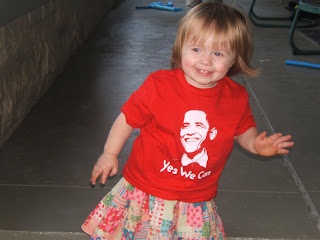 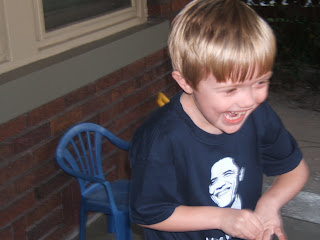 I was pretty intrigued when McCain announced his running mate. For these reasons:

1. She was a she. (Yep. It made me smile to hear that the Republican Party had a woman as a VP candidate.)
2. She had my name, petty, but I liked that she too was a Sarah Louise.
3. (And most importantly) She had a son with special needs.

And then, she disappointed me. Her agenda would not help support children with special needs.

I have a son with autism and a daughter with physical disabilities, and I need a president that will at least try to help my special needs kiddos. Obama is the only presidential candidate that might be able to support the funding and not block bills that could help Ingrid and Jack. So, he has my vote.
Posted by Sally at 6:47 PM 1 comment:

So I have a few stories to tell.

The first is a story of love.

Last Christmas I became enchanted with music, thanks to the sweet ipod classic Joe bought me as my present. It was first just an idea I had for school. I needed a mix of songs to play for my students. (Songs are great teaching devices from analyzing lyrics to transitions and beyond.) Around October of last year I mentioned to Joe that it would be really cool (I might have said rad--it would sound better with what I am about to type) if I could have a 500 disk cd player for my classroom. "You know, like a jukebox," I said dreamily--no doubt thinking of Happy Days. Anyway, after Joe spent some time chuckling, he explained that there were tiny machines out there that would handily do the same thing. Well, gosh darn it, there were! I was addicted to that ipod. I used with the students almost daily and the Busby family would listen in the car all of the time. I loved it during inservice days, because I could rock out while I cleaned my room or graded papers. I loved that ipod.

The second is one of second life.

So, I was driving on one of those all-of-a-sudden cool nights this September. I happily had the heat going and my ipod plugged in. I was rocking out. Well, a stupid song got in the shuffle and I immediately grabbed that ipod to click skip. The ipod was dripping wet! "What?!" You ask incredulously. Yes! Some condensation had formed in the change compartment where my ipod rests, and for about 5 minutes it had been taking a dip in a shallow pool. Well, it died. Nothing would revive it. Until...my friend Alison had an idea--put that thing in a bowl of rice. Luckily, I have a tub of rice. (Jack likes the sensory play.) So, I buried the ipod in rice and left it for 48 hours. Two days later the darn thing worked. Amazing.

The third is a story of loss.

Well, I was playing that ipod for classes this year. I think it was the 2nd or 3rd week of school. Every class period I would grab it off the base. Every class period until the last of the day I forgot. I was literally out of the room (teachers stand in the hallway during the changing of every class period) for half a minute, but it probably took only half that time for my student to steal it. I was crushed. I, until that moment, had never had a student steal from me. Not sure if I will ever get over that one completely.

The fourth is just cool.

I knew about Pandora a little bit, but did not use it because I loved my ipod. All of a sudden I no longer had an ipod, darn it. So, I began using Pandora. It is awesome. (Even more like a jukebox than an ipod because you never know what song you'll get next.) Check it out.

The fifth, and last, story is a one of karma?

My friend, and babysitter, Sarah is about to graduate. She participated in a study abroad trip, and when she returned, she came bearing gifts. The bag contained: coconut rum, coffee, a stuffed lamb, and an ipod. "What?!" Oh yes, you read that correctly--an ipod. Sarah's dad had given her an iphone as an early graduation gift, and she passed her ipod down to me. The next day I brought it to school. We listened to "Rikki-Tikki-Tavi" and Johnny Cash. The students heard the story of Sarah's generosity and many applauded. (I made sure to hold on to that ipod.)
Posted by Sally at 6:18 PM No comments: