As a freshman at Ole Miss, I would walk past the back of the music building almost every morning. In the back of the music building, there was a daycare for professors' tiny children. Most of the time during this hour, the tiny children would be zooming around on their little tricycles in the parking lot and playing on their gated-in play equipment. One day a little kid was standing at the fence yelling in a sing-song chant, "What's your favorite color? What's your favorite color?" to all of the passing college kids. I could hear a lot of sweet answers of "Pink" or "Yellow. What's your favorite color?", etc. And then there was the guy in front of me on the sidewalk that snapped, "Black." It was very funny, but no one laughed.

My favorite color is brown. My bridesmaids, the best group of women ever, wore chocolate brown dresses, and looked fabulous. I think brown is such a calming color, so warm and rich. I love it. Before brown was my favorite color these were my favorites:

One of the things we must work with Jack on is answering questions like what is your favorite color, food,... We have some time since I do know favorites change.
Posted by Sally at 7:49 PM No comments:

I had a lovely childhood. I am an only child and grew up in a home with a mom and a dad who loved me very much. I had Friday afternoon parties once a week with my mom, my dad and I would go out for Saturday morning breakfast or play basketball in the backyard. I had a charmed childhood filled with stories read aloud, homemade cookies, and sit down dinners with minimal amounts of television. Life was good, and I hope one day my children will be able to look back on their growing-up years with as much happiness.

All that said so that I might be allowed to tell my favorite Monroe family story. My mom cringes when I tell this story, and now she shames me into keeping quiet, but I think it is fantastic and want the world to know. Where my mom sees danger and stupidity, I see frugality, a spirit of adventure and friends (yes, my parents are my friends) finding humor in something we knew, even then, was ridiculous.

And this is the story, my FAVORITE story, of my childhood

My mom made an amazing casserole. It was spicy and rich, meaty, with noodles and crunchy water chestnuts--really delicious. She didn't make it often because it was an all day event to prepare the casserole for baking. But when she did make it, Dad and I would think about it all day at our places of work and school, and we couldn't wait to get home. Dinner would begin early and end late--all three of us stuffing ourselves silly.

Well, the day began like any other Best Casserole Day. Dad and I walked out of the house drooling, very much looking forward to the dinner of the day. Mom got to cooking. Apparently, the recipe calls for the cook to put some of the heated ingredients to the side until one can mix all of the ingredients together before baking. Mom was at that step--putting the heated ingredients to the side when something bad happened. She used a glass bowl to hold her heated ingredients. Well, apparently, these ingredients were mighty hot and the bowl was not, so the bowl shattered. Meat, noodles, glass shards all over the counters and wood floor. And I ask you, What Would You Do? I remind you that this was the Best Casserole Evah.

So, Mom did the only thing she could do. She picked up the meat and noodles, picked out as much of the glass as she could see and continued baking.

Skip on to dinner. Now, Mom explained what happened to Dad and me. She was a little concerned about eating it at this point. We weren't. Are you kidding me? Please. We've eaten a whole catfish before. It would be just like that. And it was. We dug right in--slowly this time--very slowly, actually. Especially after we discovered some crazy long glass shards, but it was such a fun meal. We laughed the entire time, and the casserole was just as good. We felt just like a Saturday Night Live sketch.

We didn't finish the casserole that night since it was a serving for 12, but we did finish it eventually. No one died. No food was wasted. We appreciated every bite of that casserole. And I have never had a better meal.
Posted by Sally at 6:56 PM No comments:

One Box at a Time 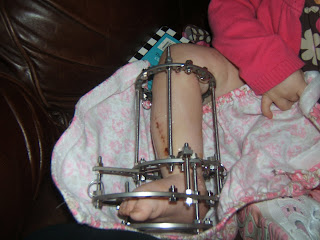 I started this in graduate school. I was such an awful grad student--namely the fact that I didn't have enough self confidence to say anything in class discussions. I would sit there thinking of what I would like to say but would only dumbly nod and smile. I would follow a couple of my professors out of the room telling them what I would have said had someone not jumped in right before I was planning on FINALLY saying something or maybe I would email my comments to the teacher even later. I am such a dork.

Looking back, class meetings should have been pleasant, but for me, they were always a difficult three hours. In the beginning of each class I would draw three blocks. After the first hour I could color in the first block. The second block I would split in half and allow myself the pleasure of coloring in two blocks--one every half hour. I would split the last block into twelve even sections. Every five minutes = another tiny, tiny square to pattern in--I brought no box of Crayolas.

So, since then I see unpleasant times as merely blocks to pattern. The time goes by faster, rhythmically, and the memory of it is a little more elegant, orderly and artistic. Like a fixator on Ingrid's leg--
Posted by Sally at 10:53 PM No comments:

I will dabble in the single parent life from Monday to Thursday. Jack is not easy, but compared to Joe, I have it very easy.

Joe and Ingrid will fly solo to Baltimore Monday, see her doctor Tuesday, have surgery Wednesday and fly back Thursday. Joe is a saint, but he needs thoughts of friends right now. It will be a difficult week.
Posted by Sally at 9:55 PM No comments: 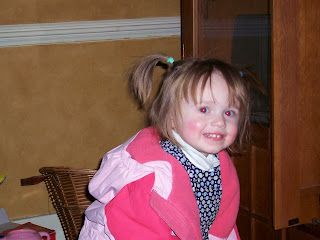 BIG GIRL INGRID! Here is the entire story of her birthday-- a little long, but some people will appreciate it! 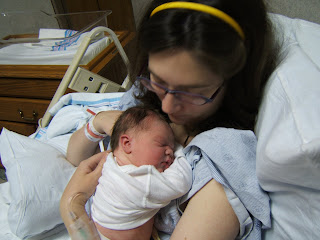 My last day of teaching was March 9, 2007, before Ingrid was born. Thankfully, it was a half day. I was absolutely ecstatic that I had made it! I was even happier after my doctor's appointment that day. For reasons unknown, the c-section was moved to Thursday, March 15. (It was originally planned for March 19.) I drove home thinking, "I know my little girl's birthday, and it's only six days away!"

Saturday and Sunday we did fun things with Jack. We went to Lichterman Nature Center and had a picnic at Tom Lee Park. It was very windy, and Joe flew a kite.

Monday and Tuesday Jack stayed home from school because he had a sinus infection. Beau Beau spent the day with us Tuesday.

Wednesday I went out to lunch with Paula Raines and had coffee with Christy and Claire Lino. We talked about Joe and my choices for our baby girl's name.

Joe and I stayed up late the night before and woke up early. We were SO excited!

We took a few pictures with the newspaper and bags that we were taking to the hospital. While driving to the hospital, we narrowed our baby's name to two choices and then just remarked on how beautiful the trees were on the drive.

We checked into the hospital and began the slow, nervous wait until our little girl's arrival. We checked in at 10am. I had an IV inserted. I answered a lot of the same questions for the nurses and anesthesiologists. I got the sour acid shot and the anti-nausea patch. Our c-section was scheduled for noon, but noon came and went. The hospital was very busy--many babies were being born on March 15, 2007! There was a little rain that day, and one of our nurses said that rain always brought out the babies.

At 12:45 Nurse Natalie came in with a wheelchair to wheel me to the operating room. On the way there, I saw my doctor at the nurses' station. She waved brightly to me and said she see me in a minute.

Spinal tap and then Joe was there with video camera.

Dr. Donato came in and said hi to me and asked me to remind her whether I was having a boy or girl (she had been out on maternity leave during some of my pregnancy). I told her a girl. She asked about names, and I said we hadn't decided for sure, but we were thinking of naming her Ingrid. I didn't mention our other name choices. I think Joe and I had decided that we were having a beautiful daughter by that point, a little Ingrid.

She continued to do prep work for surgery. At this point I really don't know what they were doing, and of course, it is all so normal to the nurses and doctors. They prep, assist, and perform c-sections everyday, but for Joe and me, it was the day a birthday miracle.

The first thing the Dr. Donato could see of Ingrid was her ear. She then said that the baby had a lot of dark hair. Dr. Donato had a little trouble getting Ingrid out of the insicision site. She tried vaccum extraction, but that did not work. She then went back and made the insicion a little longer. And out came our baby girl! She began to cry immediately, and so did I. Joe was talking about how beautiful she was and saying, "Oh! Oh!" And I was crying and so happy. The nurses suctioned her and FINALLY, with prompting from Dr. Donato ("Mom wants to see Ingrid too!"), I was able to see Ingrid. She was beautiful. Ingrid kept trying to open her eyes, and she would stick out her little tongue--so hungry already!

On our way out of the operating room, we thanked Dr. Donato. It was a marvelous day.